I recently taught a writing workshop for children at Elgin Community College, and learned that kids, or at least these kids in particular, were highly politically aware .. no, not aware.. charged.

The kids ran anywhere from 10-14 years of age, and they had been following Donald Trump's bigoted xenophobia with fear, anger and dislike.

At one point, I had them write lyrics,and one of the girls (yes, Trump seems to have alienated girls in particular), wrote a song called,Trump. The lyrics went something like this:

So as I read her lyrics out loud, the rest of the kids started 'singing' along, enthusiastically shouting,'Trump, Trump, Trump.'  College kids walking by the classroom looked inside, alarmed at a bunch of pre-teens boisterously chanting Trump's name.

Later I had them write a story where each person would write a single line, and pass to the next person to continue the story. Here's what they came up with, with absolutely no (I repeat, no) input from me: 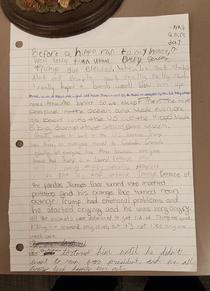 I'm not as concerned about the future of our kids now as I was before this.

www.normcowie.com
Posted by Norm Cowie at 9:01 AM