That said, I can move on to what I wanted to blog about. Last weekend I attended Windycon42 in Lombard Illinois, where this year's theme to the convention was humor in sci-fi, particularly The Hitchhiker's Guide to the Galaxy. Because Douglas Adams passed a number of years ago, and his ghost wasn't available, the guest of honor was best-selling author Christopher Moore. Not to be confused with the artist Christopher Moore, who by happy coincidence was also a guest of honor. Of course, when you're talking about the Hitchhiker's Guide, you know there are going to be coincidences. 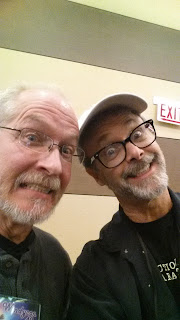 Even if you've never been to a sci-fi convention, you probably have seen pictures because attendees tend to dress a bit peculiarly, with a emphasis on Klingon. And the ones not dressed up often look like a biker gang members with an affinity for pocket protectors. So lots of grizzled beards and long graying hair. But like nerds everywhere, there's no shortage of brain power. It's more likely that the geeky guy in the corner is a chemical engineer than someone who would take your order at McDonalds. During lunch one day at what was dubbed Milliways, the  Restaurant at the End of the Universe for the duration of the conference, one of said chemical engineers demonstrated how to twist a lidded plastic bottle, and then release the gasses amid a loud 'pop' when he opened it.

Chris Moore, the author, was charming during panels, and he was amenable to selfies, even from dorks like me who have trouble with the concept of creating them. After about a dozen tries, we got a picture where we don't look like dorks.

Windycon43 will feature our own Adam Selzer as host! Adam gave us a preview this year by playing a set of music from his new album Every Man Has His Price and Mine is $300.  Funny stuff, and a side of Adam I hadn't seen before. (Get yours here: http://www.82ndstreetrules.com/ 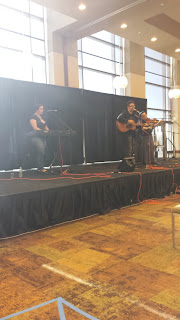