I noticed the smudges on the wall in the warehouse restroom at work, but never really thought much of them ... or bothered to closely examine them. I figured it was normal warehouse dirt .. until this appeared: 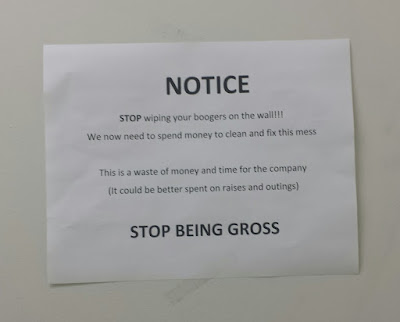 I've been practicing my empathy lately, so I tried to imagine what would go through this guy's head ... wait, how do we know it was a guy?  It's entirely possible that one of the women from the office would come back here rather than use the cleaner, exclusively-for-women restroom in the office, but not willing to spread boogers in their lounge.

So I looked around. If a woman was sitting on the toilet, mining for boogers and wiping them on the wall instead of using the very convenient toilet paper all rolled up and ready, all of the boogers would be within arm's length of the toilet while sitting.

Aha! There were many that were well out of reach! But definitely within reach of a standing guy, who, I forgot to mention, often doesn't bother to lift the toilet seat before peeing. But that's another post.

Our culprit was definitely a guy. And someone who wants to show his disdain for either his employers, or his fellow employees. So what would motivate a person to be mad at his employers? Maybe he didn't think he made enough money. Who did I know that doesn't make enough money?

Hmmm, was I the culprit?  I frowned, studying one of the boogers carefully. Nope, the smudges were much thicker than what I would make. I mean, my hands aren't like Donald Trump's, but they're the right size for me.

I wondered, could it be the guy who never flushes the urinal? It was always a joy to show up to pee and see a frothy yellow stinky liquid pooled in the bottom of the urinal.

Or was it the guy who uses twenty paper towels every time instead of one of two, causing us to run out of towels near the end of the day. Nah, I'm sure booger-guy doesn't bother to wash his hands. He probably loads up a finger with booger, picks up some more toxic niceties when he wipes, and then just leaves with all of this on his hands.

Then he proceeds to go touch the coffee maker, the copy machine, the refrigerator door, maybe other people's lunches, the door ...

I looked at the door knob, all innocent and covered with feces, pee droplets and boogers.

My head snapped around to the paper towel holder. Empty. Twenty-papertowel guy beat me to it. And I realized...

Norm
www.normcowie.com
Posted by Norm Cowie at 10:53 AM No comments:

Warning: I'm going to give you a little peek into a guy's mentality.  Not every guy, I admit, but most guys.

Seriously, ugly stuff coming up, so read on only if you think you can stomach it.

(last chance to not read on).

Okay,  if you kept reading, it' s not my fault if I change your opinion of guys forever (or at least of this guy).

Here goes ... when a couple guys meet, the reptile brain of each guy goes something like this:

"I can take this dude," one of the guys thinks to himself, smiling nicely while squeezing the toothpaste out of the other guy's hand

"Whoa, not messing with this guy," the other one thinks simultaneously, trying not to wince as his ring bites into his ring finger like an angry weasel.

Or two more closely matched dudes eye each other speculatively, wondering just how things would have turned out - think the Spartans against the Persians - if the situation didn't call for civilized behavior and polite talk about sports.

Of course we get this kind of behavior from Mother Nature. Various male deer rubbing antlers against each other, a couple bulls slamming heads, two gorillas wrestling for control, a couple lions ripping into each other.

It's the way we're supposed to be, so it's sort of natural that when I see some cheeky little punk ass young man, like, say, Justin Bieber, behaving in the way we see on every tabloid in the supermarket, the guy part of me can't help but think, "I could beat up that little punk."And then the little movie theater we guys all keep in our brains would show me a little video of a young, acrobatic me Kung Foo'ing Mr. Bieber's smug little girly face.

I saw a picture of Justin Bieber the other day. All muscular and ripped. I guess he's into mixed martial arts?  I''m 57 now. My karate days are thirty years behind me ... and I realized...

Justin Bieber could  kick my butt.

Posted by Norm Cowie at 8:49 PM No comments:

I've decided to weigh in on this whole gender restroom thing that is being
so hotly debated by the courts and state legislators ... of mostly southern
states I can't help but notice.

First of all, speaking as a guy, I don't mind if women, whether identifying
as men or women, come in our restroom. I'd really rather have a woman next
to me in the stall wanting to know if I had a 'square to spare' than former
Congressman Larry Craig trying to play footsies with me.  And if there are
any women who'd like to take a shot at a urinal, like any guy, I'd be
interested in the mechanics of how that would work.
And how would our Founding Fathers weigh in on this debacle? That's how
right-wingers usually like to address Constitutional issues, isn't it?  Did
our forefathers even have bathrooms?  History books are noticeably silent on
the bathroom habits of the colonials; and I have yet to see a PBS
documentary titled, 'Bathroom habits of our Founding Fathers,' which would
undoubtedly be sponsored by the Koch Brothers Foundation, which is used to
wading in doo-doo. I always figured our forefathers just went in buckets,
and then dumped the buckets out the windows. Which likely explains the total
lack of peeping Tom's back in colonial days.
But then I start wondering just what rights the States, or any other
government for that matter, have to impose any kind of rules on where we wee
or dump.  You see, with notable exceptions (public rest stops, public
buildings), the government doesn't provide a place for us to do our business
in the first place. We have to rely on gas stations, which, after stealing
from us at the pump, are somewhat obligated to provide a place for us to
vacate. Especially considering the harm their product causes to our air. Or
we go to restaurants, like the Golden Arches of McDonalds, for our, um,
golden showers.
(Norm, you didn't just write that, did you?)
Um, yeah, sorry
But it's McDonalds and gas stations that give us a place to go when our
kidneys need to empty out that Big Gulp or 18.6 ounce can of Monster Energy
Drink. They pay for the toilet paper, the water, the heat, the soap and for
upkeep.  They pay for the parking, the safe environment, and the lighting.

So what right does the government have to tell men not to go into a women's
restroom (or vice versa),  or men-who-identify-as-women from going in a
women's restroom (or vice versa again)?
I say none!
Either stay out of our business, or let us go on the side of a tree, like
our Founding Fathers intended!
Norm Cowie
Norm is an award-winning columnist and founder of the Humor Writers of
America. He has authored nine books, mostly humor. Visit Norm at
www.normcowie.com
Posted by Norm Cowie at 8:48 PM No comments:

I was sitting at lunch at the Erma Bombeck's Writers Workshop, chatting with Kansas, who was sitting to my left.

Her name wasn't really Kansas. It was, um, er, I don't remember. That's because there were over 500 people at the conference, each of them possessing, not only a first name, but a last name. That's five hundred names, one thousand if you include the last, and even more if you include middle or maiden names. There's no way I can remember 500 names!  I can't remember two names. Ask my kids, Critter 1 and Critter 2.

So when I was meeting all of these bright, energetic writers and lovers of humor, my brain simply shut down, and blanked out everybody's name. But here's where it gets weird. I could remember their states. I guess my mind decided that remembering fifty states was a whole heck of a lot easier than remembering five hundred names. So at one lunch, I was sitting with Massachusetts, three Californias, New York, Washington and Virginia. That night for dinner, I was sitting wth Texas, Kentucky, North Carolina and another Virginia. North Carolina's accent sounded a whole lot like Clay Aiken's. 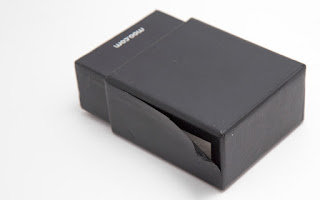 Anyway, back to my story. I was talking to Kansas, and then turned to my other lunch companion, California, but before I could say anything I noticed a perfume sized black box had appeared next to my spoon. It was all black except for the word "Moo," which was embossed on its side.

I looked at California. She wasn't paying any attention to the box. I closely, using fine tuned man-skills, determined that the box was nearer to my spoon than to her water glass, which was the closest thing to it of hers. Was this a joke? I mean, we're all humorists, right? Maybe she, seeing my last name from my name tag, thought it funny to put a sinister black box with the word 'Moo' next to a guy named Cowie.

I tried ignoring it, but I was transfixed, staring at it from the corner of my eye. I wanted to touch it, see what would happen.  I took a few bites of food, watching the box to see what it would do. Then I looked away, then back at it. It hadn't moved, and simply sat there in sinister and silent contemplation. For I knew it was evil. It was a black box -
that's evil, right? And the only thing it had to say was "Moo,' Which we all know is from the bovine language, and it means, "stupid humans, we cows are destroying the ozone layer with our methane-laden farts."  Yes, I speak Cow, for I am Cowie, which means, 'understander of the bovine language."

I wondered how a cow had sneaked into the packed dining room, and secreted this box to me. Perhaps disguised as one of the servers?  Cows are tricky beasts, you know. There's a reason they've taken over over our Congress.

Nobody else noticed the small box. The states were all happy chatting to each other, oblivious to the dark secret emanating its invisible evil beams at everyone at the table. It would cause later calamities, a dropped napkin, a forgotten spoon, the need to burp. It was evil, I tell you, evil. I could just sense Hell's hands on this box.

Feverishly, I looked around. There had to be a priest in the building! Someone who could banish this fiendishly innocent looking demon from our presence.

And that was when California stood up, swept the box into her purse, gave me a cheery smile, and went off towards the bar, leaving me, the defender of insidious cow attacks, frantically trying to wave down a religious warrior while holding off servers who thought I wanted them to take my dinner plate.

Oh, I found out after the fact that Moo is simply a business card company.

(Next time:  Marriott and their sinister 'Deluxe Dental Kit")