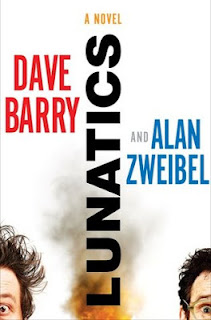 One of the main characters pees on Sarah Palin.

If that doesn't make you want to read the book, it's because you don't like fart jokes, you don't laugh at pratfalls, the 'f' word makes you uncomfortable, and you never enjoyed Dave Barry's stuff.

Barry's Pulitzer Prize articles appeared every Sunday in the Chicago Trib, and gave me something to laugh at whenever the comics page disappointed. And he rarely failed with his exploding cows and alert readers. I was hooked on Dave Barry for years.

Then he turned his remarkable talents to writing fiction with Big Trouble and Tricky Business and if you love wacky stories that will leave you grinning like a monkey in a banana tree, read the books.

Any time two writers collaborate on a single work, it's sometimes difficult to see each writer's efforts. When Dave Barry and Ridley Pearson wrote their Peter Pan YA series it wasn't so hard. If there was a funny part, it was probably Barry. But there weren't enough of those for me.

Not so for Lunatics. I have to admit, I don't know Alan Zweibel, but if he truly wrote any parts of Lunatics, he's in Barry's league (he won the Thurber award, so he probably is). I downloaded a Zweibel book after reading Lunatics.

You can tell they had a blast writing this.  And I'm sure I don't even get all of the jokes. Dave Barry's assistant Judy Smith even gets a cameo as an NBC China correspondent. I'm sure there are a lot more inside jokes that went over my head.

Yes, this is a sophomoric book. Yes, there's too much 'naughty' language. But if you want a book that takes lunacy to another level, you won't find a better read.

And Sarah Palin gets peed on.

It doesn't get any better than that.

Norm
http://www.normcowie.com
Posted by Norm Cowie at 8:11 PM No comments: