review: The Diary of a Nobody 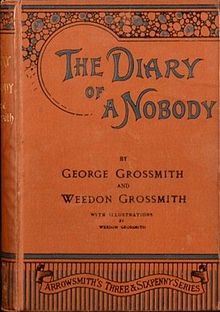 I downloaded this to my Kindle kinda,sorta by accident, and when I started reading it I was pleasantly surprised at how well a contemporary author caught the colloquialisms, manner and speech of 1800's England ... then I felt like a bit of a fool when I found out it had been,in fact, written in the 1800's.

That said (as the red begins to fade from my blush), this was a great book.. about relatively nothing ... by a supercilious ass ... with no great protagonist ... no overriding plot ... lackluster dialogue ...

And it was awesome!

Pooter was such a self-important man, mocked by those younger than him, thinking himself as so charming, so funny, while oblivious to what a buffoon some thought him to be... and somehow, others respected him for the exact same qualities.

Highly recommended as a great book to read about nothing and nobody.

So get yourself some Pooter.
Posted by Norm Cowie at 4:52 PM No comments:

Email ThisBlogThis!Share to TwitterShare to FacebookShare to Pinterest
Labels: diary of a nobody, george grossmith, Pooter, weedon grossmith 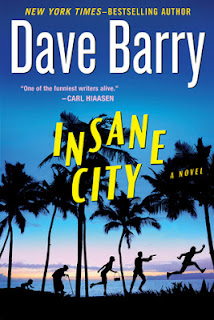 As an unabashed Dave Barry fan, I thought Insane City took off a little slow, on a topic (a wedding) that I have little interest in, in a state (Florida) whose citizens can't even vote properly and a type humor (uncomfortable) that makes the reader cringe as the hero sinks deeper and deeper into embarrassing muck.

But once Insane City picked up steam, it became classic Barry, the pace frenetic and wild, sweeping you through one ridiculous scenario after another. Barry exults in presenting fun, engaging characters ... not all of them human ... and then twisting things around.

This is Barry's first solo fiction in ten years, and while worth the wait ... don't wait ten more years to write another!
Posted by Norm Cowie at 2:33 PM No comments:

There is a new Dave Barry book out!  No, I haven't read it. But I have it, and it's in great condition other than a bit of drool that I couldn't control when I got it. 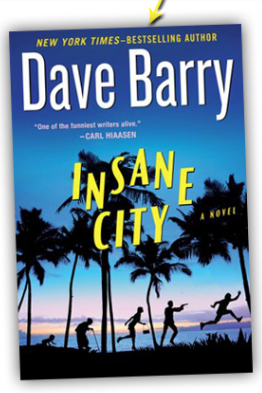 I'll blog more about it later once I'm done slobbering over it.

Posted by Norm Cowie at 6:13 PM No comments:

Email ThisBlogThis!Share to TwitterShare to FacebookShare to Pinterest
I'm waking up this blog again. Took a year off ... well, there was a merger ... and I lost more hair .. and, well... it happens. Anyway, thought I'd start off with a review I posted today of Sloughing Off the Rot, by Lance Carbuncle.

This quick little read is like an LSD-laced Dr. Seuss-meets-Hunter S. Thompson tumble into a rabbit hole, where you roll out the side of the hill, trip and face-plant into something slimy and putrid.

I'd read previous books by Carbuncle, so I had some preconceptions of what to expect.

Forget that. My preconceptions totally let me down. This was a strange tale with weird creatures, strange settings, twisted sexual eroticism and words I thought Carbuncle made up (until I looked them up afterward). Though, to be fair, most of the words I didn't know were exotic musical instruments, so being admittedly musically inept I didn't feel so bad about not knowing them.

It all kicks off when John the Revelator wakes from a coma (well, not exactly, but bear with me) to find himself in a cave where he proceeds to create ten thousand creatures by ... well, having sex with himself. Similar stuff happens after this, but you realize right from the start what you're getting into.

If can you read the first chapter without putting it down in revulsion, you'll be rewarded because Carbuncle doesn't pretend to write happy, joyful bubbly stuff.

Sloughing Off the Rot isn't for everybody, but I enjoyed it. Yet, strangely, I felt I had to take a shower afterwards.

You can get it here
Posted by Norm Cowie at 5:10 PM No comments: